Kenny and Melissa Trull’s path to marital bliss took an anomalous route, you could even call it nontraditional. After meeting during Advanced Individual Training (AIT) with the U.S. Army, Kenny and Melissa were both awarded Motor Transport Operators assignments and prepared for their first overseas deployment.

After training, the couple endured a period of “long-distance friendship” before moving together to Minnesota. Preparing to deploy, the pair decided that tying the knot would be a good way to straighten the path ahead of them. With a modest ceremony officiated by Melissa’s sister, an ordained minister, the Trull’s relationship endured the stress of deployment and, eventually, a career in the airline industry together as crew schedulers in late 2010. 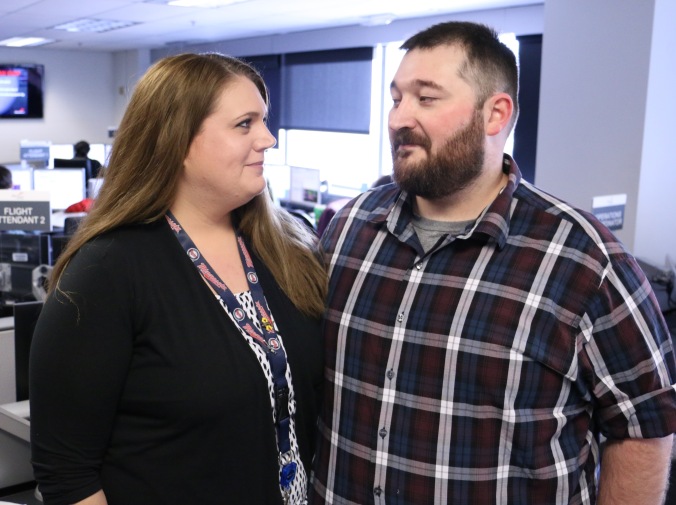 “We didn’t even date,” Kenny Trull, Procedures and Training Coordinator, admitted while sitting across a table from his wife. “We just knew we would work. We’ve worked together longer than we’ve been married.”

“We understand each other more than most typical coworkers,” added Melissa Trull, Operations Coordinator, Crew Scheduling. “It’s nice having a 100 percent comfort zone with him. He puts logic back into my thinking when things get heated, especially during IROPs.”

The two admit to keeping things professional while on the clock, something the Army ingrained in them during their time overseas. The two do carpool to work together, and when they’re not working, they love to laugh and experiment in the kitchen with new recipes.

“At the end of the day, we love working with each other. Our work and personal lives are intertwined, anyway,” Kenny added. We know each other’s strengths and play off of them. It’s like we’re Kirk and Spock.”

“Humor keeps our bond together,” Melissa concluded. “He spoils me rotten.”