Late last week, warming temperatures and the rapid melting of record snowfalls across states in the Upper Midwest brought historic flooding to much of Eastern Nebraska. Rising waters from the Platte, Missouri, and Elkhorn Rivers cut off access points into many towns and communities across the state. Early estimates of the destruction are expected to be more than one billion dollars, according to Governor Pete Ricketts. Fremont, Neb., located 65 miles northeast of Omaha, is one town directly impacted by the flooding, with roads and bridges washed away by the powerful pressure of the rising waters.

Adam Liston, an Atlanta-based CRJ-200 First Officer for Endeavor Air, grew up in the area and still calls Nebraska home. He was operating flights for Endeavor late last week when he received a text from his wife, Mandi, stating that his family was being evacuated. Mandi, who is 15 weeks pregnant, their two children, and two dogs were forced from their home after a dam broke in the northern part of the state, sending the rivers over their banks and threatening neighborhoods along the rivers. While the Liston’s home was spared damage, many in the neighboring communities were not. When he returned home after his scheduled flights ended, he knew he couldn’t sit by as the waters rose.

Liston drove to Council Bluffs and rented a Cessna 182 and flew to Fremont where he helped shuttle stranded Nebraskans over the expansive floodwaters to Omaha, roughly 30 minutes by air. He reunited parents with children, and even a son with his father who was in hospice. When there weren’t passengers onboard, he filled the plane with supplies – water, food, diapers. In total, Liston says he personally flew more than 40 residents to safety. He also called on several of his fellow local pilots to follow suit, renting planes and providing respite to residents unable to return home. Hundreds of volunteers met the planes on the ground, ensuring the donations got into the right hands. 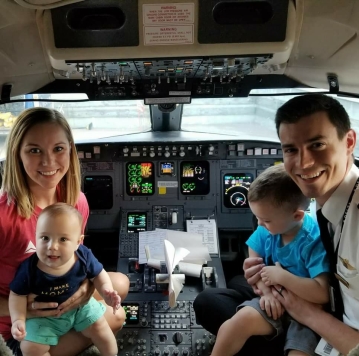 “It was overwhelming to be away from home, knowing that so many weren’t going to be able to get out on their own,” Liston said. “I knew as soon as I got home, I had to do something. I’m fortunate in that my schedule allowed me to help, and knowing our local aviation community would answer the call to help. I’ve never done anything like this, but it makes me proud to know I did a small thing to help my area.”

“Adam’s efforts exemplify the selfless actions of our family here at Endeavor Air,” noted Russ Elander, Vice President of Operations. “We believe in serving the communities we serve, and Adam’s commitment to the safety and wellbeing of his neighbors is a tremendous example of exactly that. We’re proud of his efforts and send our thoughts to those impacted by these floods.”

Liston’s efforts drew the attention of several media outlets, including CNN. Liston’s family has created a GoFundMe page to help cover the volunteer pilots’ costs of renting and fueling the aircraft. If able, please consider donating towards their relief efforts.