There are two things that Keith Dziedzic, a Detroit-based Aircraft Maintenance Technician, loves more than anything – music and fixing things.

When he’s not at work, you can often find him turning wrenches on a collection of fourteen cars belonging to him and his girlfriend- each in various states of repair – or strumming chords on his custom-made Endeavor Air electric guitar. For Dziedzic, his two passions came naturally.

Growing up outside of Detroit, a city known by two names – the Motor City for obvious reasons, and Motown, for its musical influences ranging from R&B to rock and roll – lent itself to his obvious obsession for both. Growing up the son of a professional bass player, Keith gravitated to the guitar, even if he didn’t start playing regularly until college.

“My dad didn’t push me into music, he let me explore it on my own,” Dziedzic admitted. “He always believed in not forcing your own passions onto your kids, they’ll pick it up and play on their own.”

That’s exactly what happened while Keith was in college at Western Michigan University. He bought a cheap guitar to always have access to music between classes. He’d pluck and play, learning new chords and music along the way. While he found himself getting better at making music, he always knew that he had a knack for making motors hum.

“I knew aviation was the career path I wanted to go,” Dziedzic noted. “I went to pilot school to start college, but decided I’d rather fix planes than fly them.”

So, Keith earned his A&P license, got hired at Endeavor five years ago, and has been enjoying growing professionally as a mechanic, and personally as a musician.

“We’ve tried starting a band here at Endeavor, playing aviation-themed songs and cool stuff like that. We’re still trying to figure that out.”

One thing Keith quickly figured out was the breadth of experience among his colleagues, many of whom are military veterans. Patriotism runs deep in Detroit, particularly in the Endeavor maintenance hangar. On the west wall, a giant American flag flies high above Keith and his counterparts as they deliver industry-leading maintenance reliability each and every day. 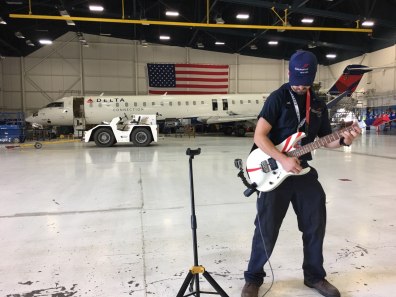 “This place is very respectful, we take patriotism very seriously,” Keith added. “I couldn’t be in a better place than with these guys.”

Which is why Keith Dziedzic offered to pay homage to veterans in the best way he knew how: serving as the talent for a video which featured that hand-made Endeavor Air electric guitar, picking the strings of the

Star-Spangled Banner, under the symbol that inspires him each and every day he’s on the job.

On an autumn afternoon, with no work scheduled in the hangar until that evening and the sun starting to set outside the Endeavor hangar, Dziedzic plugged in his guitar to an amp and cranked the volume up. As he struck the chords, the crackle of this customized 1990s Ibanez guitar reverberated throughout the massive metal building. The acoustics were like an aviation amphitheater, the audience a lone CRJ-900 getting some special attention from the team in Detroit.

Dziedzic poured out his soul onto those strings. Those who passed through the hangar stopped in their tracks as the song played, only to carry on between takes.

For an hour, Dziedzic played the Star-Spangled Banner. Chord after chord, inspired by the men and women of Endeavor who have answered the call to defend freedom, Dziedzic never tired of playing the song.

While the video crew captured various angels, Keith kept on playing. With proper safety channels adhered to, he mustered one last rendition outside of the hangar, setting up alongside another aircraft scheduled for a routine checkup later that evening.

“This video project was so much bigger than myself, I’m so proud to be a part of this,” Dzeidzic. “The flag, this song, it means so much to so many, this was the least I could do to give back. I’m very humbled to share this with our veterans.”

On behalf of the entire Endeavor Air organization, we’re honored to share this tribute with you. Thank you, veterans, for you’ve done. Please watch the video below: