The old idiom of the apple not falling far from the tree is an appropriate way to describe Lori Demulling’s relationship with her father, Larry Gardner. At an early age, Lori knew she just might follow in his footsteps into the aviation industry – no one could have foreseen just how closely their paths would align.

To understand Lori’s journey into aviation, let’s soar back in time to look at Larry’s start in the industry. It was 1963 and the United States was ramping up its efforts to assist the South Vietnamese government in overthrowing the Communist regime of the North. The U.S. had a vested interest in preventing the spread of Communism, so it pledged ground, air, and sea support to the South Vietnamese.

Young Larry answered the call to defend freedom as a member of the United States Air Force. Trained as a jet engine mechanic, Larry avoided the front lines of the Vietnamese jungles, but spent his tour in Thailand maintaining the engines of the F-105 Thunderchief, a supersonic fighter bomber responsible for thousands of bombing runs in the early phases of the Vietnam War.

After his service in the Air Force, Larry and his newlywed bride, Carol, moved to Washington State to start a job at Boeing. On his first day on the job, Boeing rolled out plans to start production of the 747. Throughout his career at Boeing and eventually Northwest, Larry found himself maintaining the engines of the Queen of the Sky in Minneapolis.

Growing up, young Lori says she recalls thumbing through dad’s technical manuals. For a research project, she even wrote a paper on turbine engine theory.

“I was always interested in machinery and how things worked,” Lori said. “Growing up on a farm in Wisconsin, right off the start, we learned how to work hard. We didn’t get to play until the work was done. It was a good way to grow up, I got to help dad with the machinery, drive tractors, learn to weld; I just had that mindset early on.” 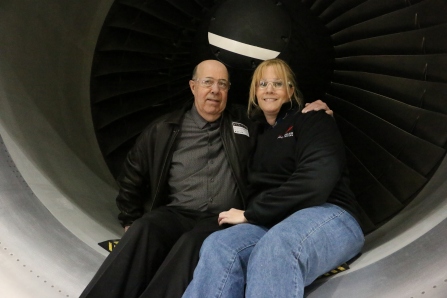 “When the kids were younger, I’d bring them out for tours of the airport,” added Larry. “I saw the attachment to the helicopters and airplanes in Lori at an early age.”

Reading the manuals and talking to her dad about his daily duties were enough to inspire her to want to be just him. After high school, Lori signed up for technical school, which Larry felt his experience would lend in her learning.

“When she first started, I thought I could help her in her studies,” said Larry with a smile. “But sure enough, it wasn’t long before she knew more than me.”

When it came time to take her A&P practical test, she worked with the same man who awarded Larry his own A&P license.

Lori’s passed with flying colors and started her career, ultimately moving into technical inspections, where today she serves as Endeavor’s Manager of Inspection. As Larry’s career was ending, Lori’s was just ramping up. At his retirement party in 2004, Lori secretly hoped to get a photo with her dad sitting in the engine of a 747. During the party, Lori’s camera ran out of memory and she wasn’t able to capture the moment.

By chance, last week, Delta’s Minneapolis-based TechOps team was working on a 747 in Hangar Bay 5. Given Delta’s intention to retire this fleet by the end of the year, Lori knew this could be one of the last moments to get that prized photo that eluded her 12 years earlier. After talking with the maintenance supervisor, Lori surprised her dad with a special access tour of the plane in the hangar.

Larry, Carol, and Lori slowly walked under the massive outstretched wing of the jumbo jet. In front of the #3 engine, a small ladder was set out, and a foam mat was placed just inside the cowling ring. Lori climbed in and positioned herself on the left, offering a hand to help Larry climb in as well. The two sat down and admired the enormity of the engine, the plane, and the moment.

“I had been waiting for that moment for 12 years,” Lori admitted. “It was a very special moment that I truly appreciate.”

When the three finished touring the inside of the aircraft, father and daughter paused to take photos of the massive jet’s tail on their own phones. It was at that moment when the apple that fell from the tree yielded its greatest harvest.

“My dad taught me about integrity,” Lori concluded. “He always said you’re nothing without integrity. If something doesn’t fit don’t force it, and take the time to do it right.”

This photo op took 12 years to get just right, a memory worthy of a frame.