For MSP-based First Officer, Wes Dixon, never in his wildest dreams would he have envisioned his passion for flying would land him a role in a movie starring Tom Cruise. However, during production of the megastar’s new aviation-themed movie, “American Made,” Dixon was one of four local Georgia pilots who picked up the phone when Hollywood came calling. 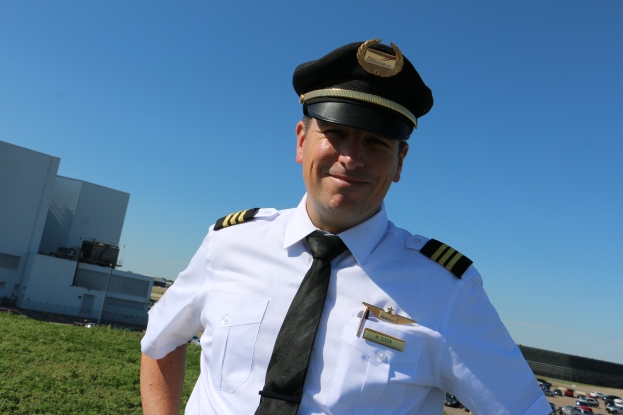 Dixon started flying as a way to take his mind off his first career – fire and rescue. After 20 years as a firefighter and paramedic, Wes had taken up aviation as a hobby, eventually starting an aircraft ferrying business for aircraft owners. After hanging up his helmet and boots, he elected to transform his career and become an airline pilot. Around that same time, his local airport – Cherokee County Airport in Canton, Georgia – was undergoing a transformation of its own: Becoming a replica of the Mena, Arkansas airport where the true story of Barry Seal, an infamous airline pilot turned drug runner turned CIA informant, unfolded.

Seal, who is played by Cruise in the movie, admitted to having smuggled nearly $5 billion worth of drugs and weapons into the United States for Columbian drug cartels. Using his local airstrip in Mena as the center point of distribution for many of his shipments, Seal found himself in a harrowing lifestyle that practically wrote itself into a Hollywood script. Dixon said that the lengths the film’s producers went to maintain historical accuracy was impressive.

“Not many people know this, but the Atlanta area has become the new Hollywood,” Dixon noted. “Studios are popping up all around, and they invested millions into the Canton airport to make it look like the Mena airport. From hangar signage, to fencing and landscape, to the town of Ball Ground, Georgia, this area literally became Mena, Arkansas.”

Dixon was recruited to serve as a stunt pilot for actor Jayson Warner Smith, who was not a licensed pilot, but plays the role of Bill Cooper, a drug-smuggling pilot referred to as a ‘Snowbird’. Tom Cruise, on the other hand, is actually a highly proficient pilot with multiple type ratings who owns several aircraft, including a P-51 Mustang.

Dixon (front right) on set with actor Jayson Warner Smith (front left), and actresses from the film ‘American Made’

“It’s not every day you get to fly formation with Maverick from ‘Top Gun’,” Dixon laughed. “He is a phenomenal pilot. He very much fit the bill of a Part 121 pilot. He follows checklists to a T, he was focused, certainly not the cowboy I expected.

“When I met him, he wasn’t anything like I anticipated. When he’s in character, he’s all business. When he’s not, he’s laughing all the time. He’d walk past me and address me and remember my name.”

Dixon likely won’t be earning any awards for his role in American Made, but his former aircraft – a 1968 Model 36 Beechcraft Bonanza (N7707R) – may turn a few heads.

“If you’re interested in aviation, this is going to be a good General Aviation movie,” Dixon admitted. “If you like propellers, like I do, there will be lots of that in the movie. Hand flying, stick and rudder flying, with a story line. It was a lot of fun to be a part of, and I’ll be the first in line to see it.”

American Made opens in theaters nationwide on September 29 and is rated R.