When a dream takes flight, it’s hard to bring it down. For CA Robert Mascunana, NYC Chief Pilot, growing up in the depressed jungles of Manila, his dream of becoming a pilot faced incredibly long odds. The first moment he saw a plane as a small boy in his ocean-front village, that dream was planted; nurturing that dream in a poverty-ridden nation would prove to be a struggle.

As the small propeller powered plane rumbled over his adolescent head, Mascunana watched in awe and wonderment. He told his mother that, someday, he was “going to drive one of those.” His mother, quick to plant his son back on the grounds of reality, told him that given their circumstances, he’d have a better chance of becoming a Mananguete – translated as a “coconut pilot” – a local traditional skill where men scale tall palm trees with the intent of harvesting the oils and fluids inside coconuts. That statement served as a crushing blow to the young Mascunana, but also fueled his desire to soar above his situation.

Mascunana, who with his older sister, was raised by a single mother, didn’t have a strong male influence in his life. His father abandoned his family not long after he was born, leaving them poor, but not so poor that they didn’t have food, clothing, shoes, or electric-ity. It was a struggle growing up, but Mascunana never let his dream of flight keep him grounded.

“Life was tough in the Philippines,” recalled Mascunana. “Everyone and everything there is negative. Without a dad, I had no mentor in my life. I’d see these airplanes flying overhead and always say, ‘One day…’”

His local high school and college didn’t offer aeronautics courses, so he worked hard, got good grades, attended the local university and got a degree in Marine Transportation. While he might not be flying planes, he could “fly” a boat, and that got him one step closer to his dream – becoming a pilot and moving to the United States. 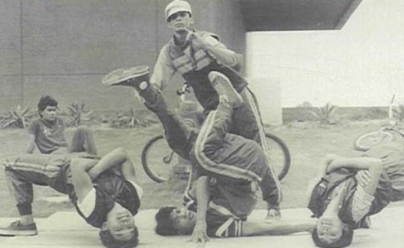 Throughout his teenage and early adult years, Mascunana would watch American sitcoms and music videos – Michael Jackson being his greatest inspiration – and along with several friends, his “crew,” set out to become professional dancers. Mascunana graduated college and quickly moved to Italy, not to commandeer great sea vessels, but rather to show off his moves.

“The three of us were break dancers, doing flips and stuff. Then we started training on acrobatics, creating our own costumes, putting on a unique show. It was really amazing.”

As he grew a little older, and a little wiser, he started a family and moved to New York City.
It wasn’t until the mid-1990’s that Mascunana finally got to take hold of his dream of
flying. By that time, however, his instructors and fellow aviators doubted his abilities
to become a commercial pilot. Much the way he held firm to his dream to get off the
islands of his childhood, he invested as much time, talent, and treasure into his
flying as he could afford.

Hour by hour, Mascunana built his time, earned his ratings, and after hundreds of hours
volunteering to ferry vintage war bids from airshow to airshow, he was hired by a small
charter company and he relocated to Key West, Florida. Away from his daughter, Mascunana felt the strain of his dream pressing on his shoulders.

“This was my dream, if you don’t support your dream – or have others to help you support your dreams – those dreams die, and you never become who you were destined to be,” Mascunana noted. “Dreams are who you are. Sure there’s fear, that’s a normal response. Can you imagine who I would be had I accepted just being the poor guy in the Philippines who wanted to come to the U.S. and become a pilot, but never did it?” 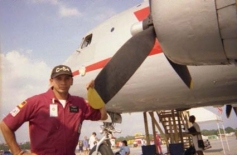 Mascunana’s dream came full circle when he was hired by Pinnacle and was based in Detroit. As he was finishing a trip and heading home, he noticed on the departures board a flight bound for Manila. “A direct flight from Detroit to Manila…” recalled Mascunana. “I knew that the first chance I would get, I’d take a trip home.”

Just a few weeks later, Mascunana did just that. More than 18 hours aboard a Northwest Airlines 747, Mascunana touched down in his native land for the first time in more than a decade.

“I was wearing my pilot uniform when I arrived and drove straight to my mom’s house,” Mascunana said. “I stood in the doorway and [my mother] looked me up and down, I told her, ‘Here’s your coconut pilot!’”

The emotional reunion was fueled by a dream three decades old. Tears of joy, laughter, and memories in that moment erased the pain of a dream nearly washed away by the simple words of a parent to a child. Mascunana offered up some words of advice to anyone who might find their dreams squashed by their present state.

“No one can tell you what will motivate you in life. It’s hard to navigate towards your dream. You need to have the realization on your own, this is how it’s supposed to be. Keep pushing back against what people are telling you. Those words from my mom, they hurt me, but look at me now.”

From the impoverished prospect of becoming a coconut pilot, to moonwalking his way across Milan, to flying million dollar aircraft with 76 customers behind him, Mascunana’s path to the New York City Chief Pilot’s office has endured many diversions. It was his unrelenting pursuit of a passion that was planted at an early age that allowed him to persevere and prosper as a commercial pilot.

“Remember your dream, remember where you came from,” Mascunana concluded. “It’s not going to be easy, and it’s not going to be fast. You’ll fail, you’ll fall, you’ll make mistakes, but you’ll get up. Keep that dream alive because that’s who you are.”